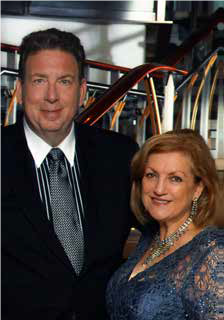 Rich and Julia Freeman are members of Family Church in West Palm Beach, FL. Rich was born and raised in Brooklyn, NY, into a very typical middle-class Jewish family. Although he was somewhat hostile to the gospel, at the age of thirty he became a Christian through the witness of his wife and Chosen People Ministries staff. He attended Pace University in New York City, where he received a B.A. in accounting and an MPA in financial management. He later attended Dallas Theological Seminary for three years, earned a M.Div. from Seminary of the East, and a D.Min. from Gordon Conwell Seminary. Julia was born outside of Rome, Italy, but came to the U.S. when she was three. She was raised in the Bronx, NY, and became a Christian at the age of thirty. Rich and Julia met at a fraternity party on Julia’s nineteenth birthday, and although Rich is a Yankees fan and Julia is a Mets fan, they were married two and half years later. They have three adult children: Heather age 43, Brian age 41, and Joel 32. They also have 6 grandchildren: Cody age 18, Carrington age 15, Zoe age 14, Ellenora age 3, Ilana age 2, and Channehleigh age 10 months.

Four years after his profession of faith, Rich was on his way to Dallas Theological Seminary with his wife Julia. The year was 1987.  While in Dallas, Rich began working as a missionary with Chosen People Ministries (CPM). Before finishing the degree program at Dallas, Rich was called to pastor the congregation where he was saved, which he did for the next ten years until becoming full-time with CPM.

So who is Chosen People Ministries? CPM is dedicated to presenting the Truth of Jesus Christ, the Messiah, to Jewish people all around the world. The ministry was founded in 1894 in Brooklyn, New York, and its headquarters are now located in New York City, home to nearly three million Jewish people. At the core of their work is the proclamation of the gospel. There is a belief among Jews today that to become a Christian is to abandon one’s Jewishness. This is why there is need within the context of Jewish evangelism to employ methods which center on relationship building whereby a person of Jewish heritage has ample space to discover the falseness of this claim. Jesus was in fact Jewish. CPM has five major programs to respond to Jewish communities and their needs: Missionary Outreach, Evangelism Centers, Messianic Congregations, Training Programs and Publications. However, the vision and work of CPM is also the task of the Church, Gentile or otherwise. So how does CPM engage churches? First, they help to equip the Church to undertake Jewish evangelism, which is a mighty task. With only about 150,000 believing Jews alive today, not even 1% of the total worldwide Jewish population, the challenge is tremendous. In addition to resistance from Jews, one of CPM’s challenges is convincing this generation of church leaders that Jewish ministries are worthwhile. This is why the second aspect of their work is also important. Namely, they minister to churches by showing them how a better appreciation of the Jewish roots of the Christian faith can enrich their understanding and their proclamation for God’s Word. The fact remains that Jews are unreached, and the Church must not sit by and do nothing.

On July 1, 1999, Rich assumed his position as Vice-President and Director of Church Ministries and Conferences for Chosen People Ministries, which he holds to this day. Rich works with churches throughout the country and abroad, teaching bible conferences on various topics such as Jewish Evangelism, Messianic Prophecy, End-Time Prophecy, The Church and Israel, The Feasts of Israel, and much more. He also ministers to local churches in Florida, where he and his family reside. Meanwhile Julia works as the Director of the Church Ministries Department. She is tasked with engaging churches in taking up and being effective in Jewish evangelism. In an environment of “replacement theology,” which proposes the Church has replaced Israel in God’s plan, Julia no doubt has a difficult task.

The Freemans have also been involved with the founding of a new Messianic Center in the heart of a Jewish neighborhood in South Florida, which boasts one of the largest Jewish populations in the world. The idea behind a Messianic Center is to serve Jewish people in all stages of life from children to the elderly. The center provides everyone the opportunity to experience the love of Jesus and come to know Him personally.

The Message and Scope of the Mission | Chad Vegas